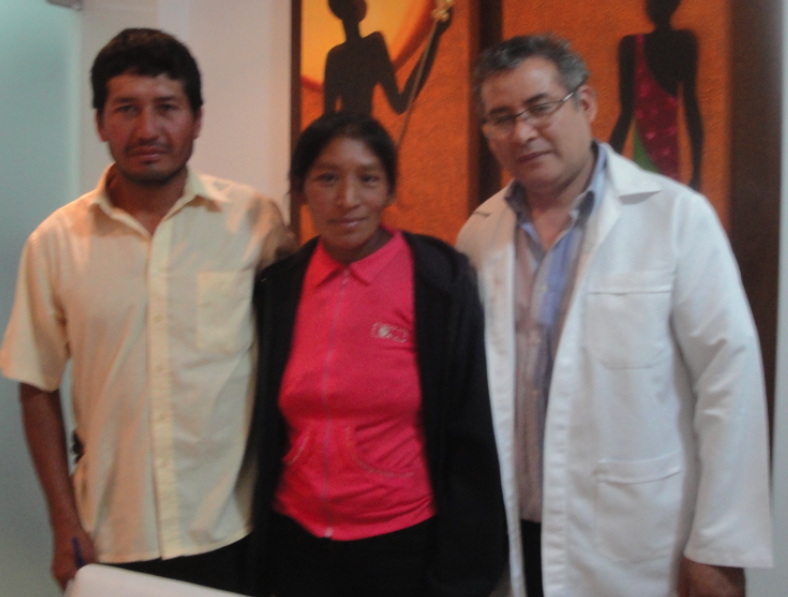 Benita Mendoza Onco grew up in the countryside of Bolivia, about one hour outside of a small city called Camiri. As a child, Benita spoke both Spanish and a local language called Guarani. Benita is now 31 years old and the mother of 8 children. She continues to live in the country with her husband and small children, washing clothes to earn a living while her husband works on nearby farms. Together their daily income is about 30 bolivianos (approximately $4.50).

3 of Benita’s sons in front of their house

Benita, her husband Salomon and Dr. Vela, her cardiologist

Last year, Benita felt dizzy and tired, but did not know why. When Benita was examined, she found out that her heart was beating very slowly – so slowly that it was hard for her heart to pump enough blood to her body. This was making her tired and dizzy. Because her heart was so slow,
Benita needed a pacemaker. Benita and her family were worried, because they could not afford a pacemaker. However, Benita soon found out she was pregnant again! Benita decided to wait until after the baby arrived to have surgery.

In early March, Benita gave birth to healthy twin babies – one boy and one girl. During her pregnancy, Benita had felt more and more tired and dizzy, and once the babies were born, she was ready to have a pacemaker implanted. She traveled 4 hours by ambulance from Camiri to the bigger
city of Santa Cruz. On the first day she was hospitalized, her heart was so slow that she fainted. On March 15, Benita received a pacemaker supplied by My Heart Your Heart and leads and introducers supplied by Kids For World Health. 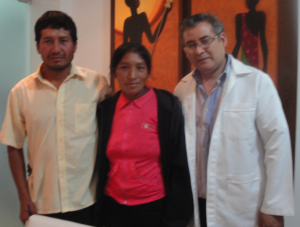 Benita, her husband Salomon and Dr. Vela, her cardiologist

One month later, Benita feels better able to take care of her children, including the twin babies. She and her husband are very grateful to everyone who helped Benita receive a pacemaker and they look forward to raising their kids together.