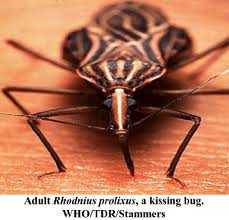 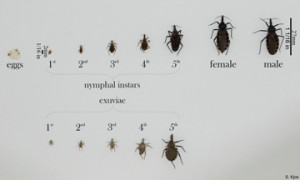 HOW IS IT CAUSED?

Chagas disease is caused by a parasite within an insect. The insects or beetles called “kissing bugs,” live in the cracks and walls of mud and straw houses. Mud and straw houses are common in poorer areas in the cities and in rural communities in many South American countries. The bug carrying the parasite lives in the cracks of these structures. At night, the bugs bite and also leave their excrement near the bite site. That is how the parasite is released that can get into peoples’ bodies and infect
them.

It is estimated that 11 million people have Chagas. and about 50,000 people each year will die from Chagas. Most of these people live in Central and South America. Surprisingly, nine cases of Chagas were reported in the southern United States last year, causing the Center for Disease Control to have one of its departments focus on it.

It is hard to diagnose Chagas disease. It may first feel like the flu. But, then there are no symptoms until years after the disease has progressed and caused serious health problems. The disease can progress for ten to twenty years! A third of the people who have Chagas will develop permanent damage to their heart, esophagus and intestines.

HOW CAN IT BE TREATED?

Treating homes with insecticides to kill the insects that carry the disease, can help eliminate new infections. This is difficult to do, since the pesticide has to be used all the time. Pesticides can also be harmful when used all the time. Scientists are trying to come up with a special paint that may prevent the beetles from penetrating the mud and straw houses.

The medications used for parasites are very powerful, and expensive. The drugs available now cannot help when the disease is in a chronic or late stage. People who are helped once, can become reinfected again.

The pacemaker, an electrical medical device that regulates heart beats, can help a sick person survive. If a pacemaker is inserted into a person’s chest who has late stage Chagas heart disease, that person can continue living. Pacemakers are very expensive to insert. They also require maintenance.

KFWH has been dedicated to helping people in Bolivia who have Chagas disease. KFWH has paid for people who have end -stage Chagas disease to have leads and wires put in that attach to a pacemaker. People can stay alive and lead a regular life again. They can watch their children and grandchildren grow up and be a part of their family for years to come.

KFWH has created educational videos for people to learn about Chagas and to show them how they can prevent Chagas. The video also explains how they can be helped if they need a pacemaker.

KFWH also educates people in the United States about Chagas disease. KFWH encourages scientists and drug companies to continue to look for tests to diagnose Chagas and ways to cure it. KFWH works in cooperation with universities and doctors who also help people with pacemakers.